Film about pollution in China 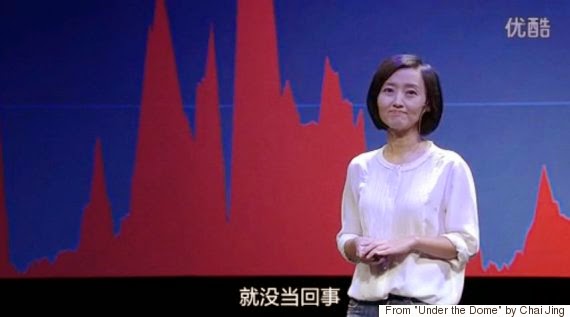 Chái Jìng (柴静) released a self financed film 1st of March 2015 about environmental problems in China. Even the official news media of People's Daily linked to the film, and already after three days had it 100 million views in China and 280 Weibo comments. For us none Chinese speakers it can now be watched at youtube with subtitles (when this is written only the first 20 minutes has  yet subtitles). I wish though that she had taken a less emotional view, and a more scholarly one because I think her point is correct, but she does do a lot of silly mistakes in statements such as "one doctor told me", or only showing pictures on days it's smoggy without adding it's not always such, by now I've spend half a year in China, mostly in Beijing, and knows it's far from normal. Using this technique it provides people not agreeing with her some very wide targets to fire at instead of the main point - just like anti climate changers do here, just like anti evolutionists do, not to mention what the tobacco advocates did for an eternity. Go for the errors of the messenger if you can't attack the conclusion.


Lately environmentalism has been a greater subject in China as well, and both ordinary people and politicians seems to get the point that affects the whole of the planet. They face the same problem as we, especially urban population and middle class strive for better environment at the same time as they want their shining new SUV's, while at the same time companies strive for loosened control or threat with taking it's business elsewhere. We in the west had the luxury of doing the transformation to a, slightly, more environmental society over decades, and the production companies mostly took their production elsewhere. This is one reason why roughly 40% of Chinas pollution comes from factories run by foreign companies that we exported in the process of cheaper labour and less (should really be read as "no") restraint on pollution. If all nations did in fact impose harsher levels on allowed pollution and had the same labour laws and salaries, those 40% might very well be heading back our way. But all is not shaped in polluted black, as showed on our wedding in central Beijing when we had a clear blue sky. The Chinese government surely seems to take the subject seriously. Even though a lot more needs to be done, it has started. Year by year has seen harsher conditions imposed on industry, vehicles et cetera. They are the country in the world with the largest percentage of their GDP devoted to renewable energy. While my home city is proud of it's eco district to be build, Chine does the same but on a scale of founding whole cities. They are world leading in solar energy, and among the top in wind energy, and have lowered their coal consumption (which we hope is a permanent move on the curve) although the country needs an amazing increase in it's energy output every year. Changes naturally doesn't take affect immediately, and just as Ruhr in Germany was a place of pollution horror-stories from when I was a child, it's now seems a place like "anywhere else". And so I'm certain China will be as well. The greatest problem though is that we nowadays knows the problem is global, and that speed is of the essence.

A thing that surprised me in her film is that she said 0,5 million dies in China every year because of air pollution. This might seem a lot, but it's also from a huge population, giving about 0.037% a year. USA cites they have 0.2 million dead for the same reason, but then on a smaller population giving almost double the fatality in 0.063% a year. According to WHO the world average from the same kind of pollution is 0.1%. Maybe it was a miss in the translation?

Addition:
China Daily has a longer cover under Hot Issues dated from the 3rd, about the movie that is well spend time to read. In addition it also has an article dating from the 4th about the 12th National People's Congress where the governmental spokeswoman among other stated:
Fu Ying said the new Environmental Protection Law was introduced after four readings by the Standing Committee of the National People's Congress.
The law has been called the "the most strict Environmental Protection Law in history", and promises "zero tolerance" toward pollution. It carries tough punishment against polluters.
Posted by Unknown at 13:48