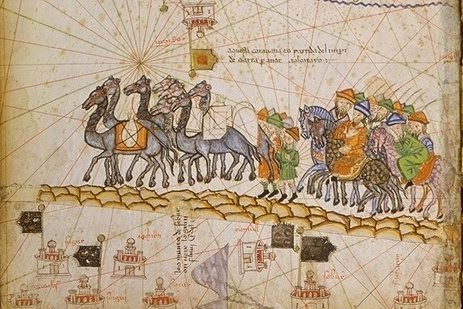 China has for quite some time talked about their willingness to create a new Silk Road that would span all the way from China to the Netherlands, and eventually be operating fast track trains. Before the grand vision can be utilized, the trains operates through current track systems over the Trans-Sibirian railway.

Even though the ancient road stretched between Xi'an in the east to the eastern shores of the Mediterranean in the west, although the new Silk Railroad connection might suggest a slightly easier travel, it still is quite some feat stretching from Yìwū (义乌) and Madrid. Although not being defined as the first train from China taking the (temporary) Silk Railroad, it is defined as having taken the worlds longest direct connected rail up to date.

Naturally, pretty much all links have the mandatory China slammer included in some way, because having an article with just information, or even positive such, about China is not seen with mild eyes from more or less any media owner in the west. Not to mention more sinister organisations. Sigh...
Posted by Unknown at 09:55