Wedding - Rituals around the 肩舆 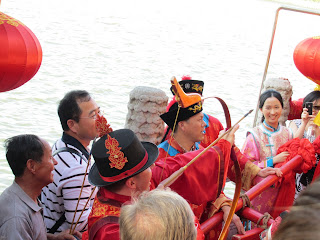 When I had stepped out of my litter, it continued away, and Xue's entered instead. Now came the part where I was to shoot an arrow above her litter to scare away the demons of the heaven, and then another arrow to the ground in front to scare off the demons of the inner earth, and then one directly at the cloth cover the front of her litter to scare off the demons that might have followed her (or possessed her - mmm, sounds fully plausible).

First after this was Xue allowed to step out of her litter.

If you wonder about the pointy part of the arrow, it was no ordinary arrow head made out of iron, but instead hard plastic. Meaning it's well enough to pick an eye or two, but don't get me arrested for murder. I did think a moment or two about shooting above the litter because there's people exactly everywhere, but then thought "what the heck, it's my wedding, and if they don't move I think we can handle one or two casualties". And maybe it would be a Buddhist that gets hit anyway and then it would be roughly ok since the person would just believe s/he got punished from a deed in a previous life. Very practical, don't see that at home.
Posted by Unknown at 17:45