It was now time for the major part of the ceremony, and we ventured into the private part of the restaurant - and by that loosing about 2/3 of the total amount of people since unknown bystanders couldn't follow us any more. 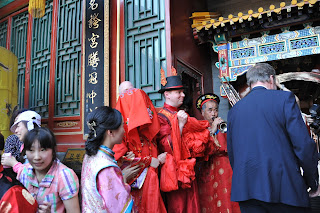 Once our guests had come inside, they found a long red carpet along the way we would take. It had two stops during it's course, fire symbolizing hope of a prosperous and adventurous life ahead, and a horse saddle for hope of a peaceful and healthy life ahead. Since Xue didn't see anything, it was important for me to stop at the right place, and for the bride's maid to guide her over them. 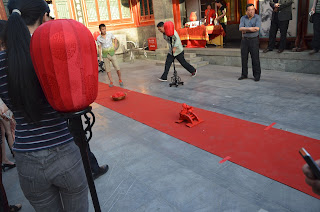 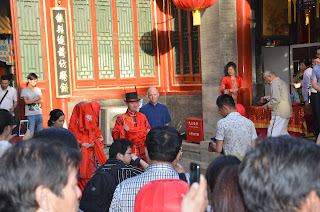 Once in position it's important to inspect the goods. Was I happy with the prospect? Was it the same one I've ordered? Had they swapped her? So lifting a little on the veil on the sides, if I was happy I then had to removing the veil with my little Potter-wand. It was a little tricky since I had to remove the veil from the front, minding very carefully not to stick her in the face with the stick, but also not to loose it since the cloth was a very slippery material indeed. Well, in the end the package honestly described the goods, we proceeded and the veil nicely cooperated and and the ceremony went on. :D 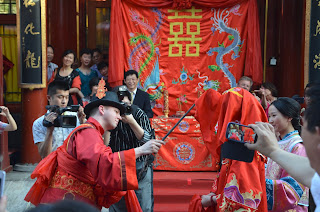 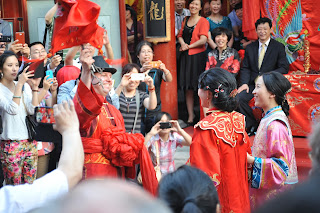 Now it was time to bow and curtsy a lot, namely nine times. Not only to make amends for referring to my wife as good in the previous sentence, but also you first bowed to the spirits, then to the parents and lastly to each others. 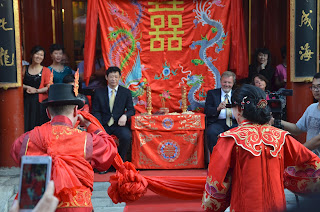 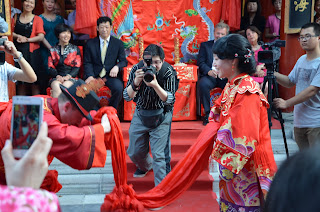 After all this physical work it was time to refresh a little with drinking tea, at least so for the parents who had been sitting on the chairs the whole time just relaxingly enjoying it all. So we both give each other's parents a cup in order. This part also included having to speak the phrase  爸/妈,请喝茶 (Bà/mā, qǐng hē chá - Father/mother, please have some tea). This part was actually what made me most nervous in that the rising tone, as in tea, is what I have the hardest time with. Having a microphone stuck up your face and 80 persons listening isn't really making it much easier... In the end my father in law was pure evil in that he made me re-say it three times! But since he now is my father in law, you know how it ended - puh. 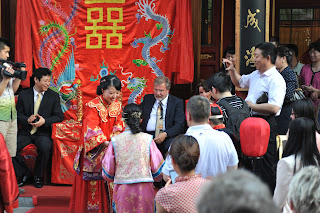 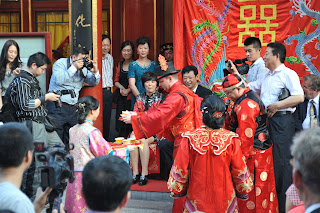 Then came the act to make us husband and wife. When we toast with each others. 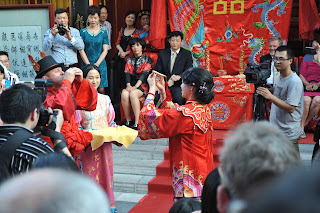