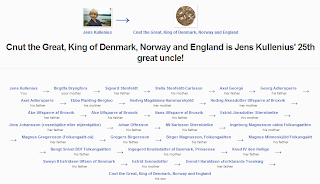 Having a family tree that had been part of the nobility up till the mid 1800 has its advantages when doing genealogy. My grandfather's grandfather (morfars morfar) was born into nobility as Axel Adlersparre (later Georgii) 1841, but later renowned it for love - this must clearly be where I have my romantic side from! :P

We often hear that everyone is related to some famous people, as long as you just count siblings next cousin's janitors and such alike. Moving from that, the highest in the hierarchy is when your have a straight line on the father's side. It turns out I have one not to be too ashamed of! If just counting father's and mother's line, not even any cousin's, I'm a descendant of King Cnut the Great. Sure, Birger Jarl is also in the tree, but who is he compared to the Scandinavian hero of Cnut the Great? As a person who's always been in love with history, I'm naturally feeling very proud! Only sad part was that my first hero/in from Scandinavian history, Queen Margrete wasn't in as a direct line.

Another charming part of this is that in 990 when the city I live in, Lund, was founded, it was by a direct forefather of mine - Sweyn Forkbeard. who was the grandfather (farfar) to King Cnut the Great.

My luck in genealogy is of cause that we 'ordinary' were part of a nobility that previously were royal. You need to be noble to have a certain genealogy older then 1600 - and in many cases just to get older then 1800, and you need a royal line to be able to go as far back as the Viking period here. After Sweyn Forkbeard there's one or two generations we know about, the rest is mythology.