Pre-Premier of The Hobbit in Copenhagen

Being in the Tolkien society has it's privileges. Three days ahead of the world premier of The Hobbit, we were invited to Copenhagen to take part in the pre-premier. Sadly it wasn't Grand with the capital G, becuse true or not, it was said that Peter Jackson would attend the pre-premier in Copenhagen - of all places, but that Warner Bros had then come up with the (in our point of view) not so brilliant idea that only Wellington, London and Tokyo would have the big pre-premiers. Well, Wellington and London I can understand, but Tokyo when out of three? I have heard rumours about Hollywood being a biggy, although it's nice some other parts of the world gets more focus. Anyway, it was also rumours about the Queen showing up, but that she had cancelled.

On our way there from the train station in Copenhagen, a TV-team followed the brave 24 of us. This in a snowy day that the weather forecast put as a level 2 blizzard - stay indoors. In this weather, this brave little Hobbit went as Hobbit's do - without shoes: 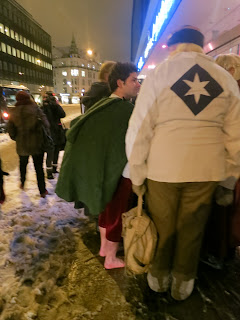 Once inside we got to go through the red carpet with all the flashing cameras and video cameras  Although everyone of us 24 got filmed, I got quite happy about being interviewed directly by the TV (sadly I never found out what company it was). Thank you Melinda for having the presence awareness to take a photo of me at this moment! 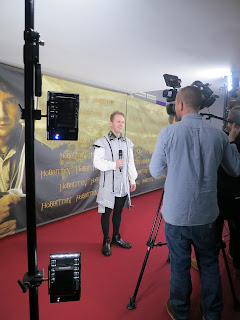 We also got some official photos and videos taken when walking down the stairs, but those from my camera sadly suffers from bad lightning: 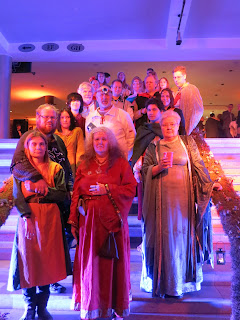 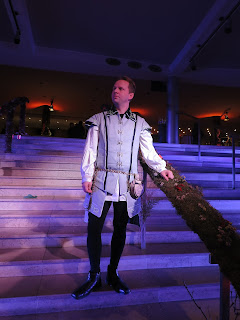 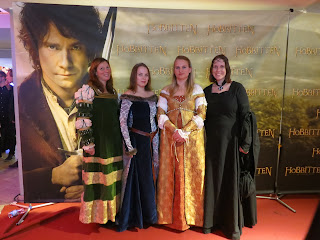 So what about the movie itself? Without giving any spoilers away - which I know I would be killed for by some friends... the movie takes you exactly all the way through chapter 6, a not that stunning 108 pages into the new Swedish translation by the name Hobbiten. If you make almost three hours of film out of that, you all understand it wasn't completely true to the book. Some will like the extra, some won't, and some will hopefully do so after a few runs - just like with the Lord of the Rings. 3D or 2D? Sadly I'm still a pro 2D person. The colours are just that much better, and it never fail you with something feeling like it just hangs in the thin air. Still, as 3D comes and goes, this one was really well done.