In the city of Gävle they have been putting up a giant yule goat every year since 1966 at the first of advent. That's one part of the tradition, the other part of it is the battle to save it or burn it. The government do what they can and impregnate it in anti-flame materials, having guards, having cameras and so on, and then there's some from the public who tries to set it on fire before the month is over. It's so well know event that official betting exist on it. Statistically, it's pretty much 50/50. The outcome 2012 was just reported by the news, and the outcome was that it burned to the ground.

The best year so far though, was when a tourist from USA had it burned down. Got caught by the police, and stated that he thought it was tradition to burn it, and didn't know it was an offence. 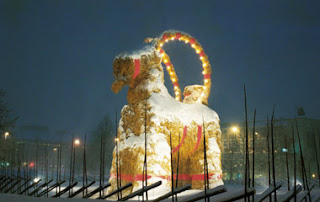 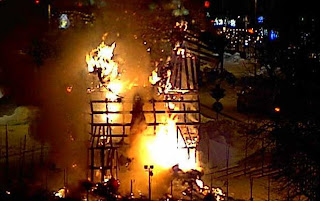